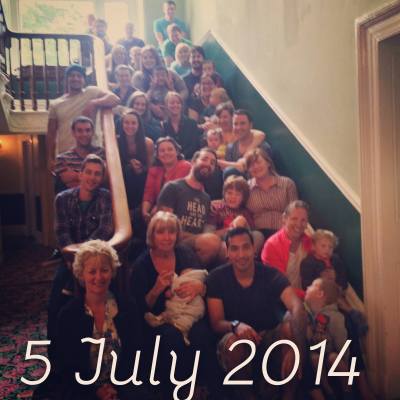 Now that the clock is officially ticking down our last days in Ireland, I’m starting to feel the pressure: the pressure to organize and pack and make appointments and settle accounts and say goodbyes. It’s crunch time, yet I’m still in a bit of denial about the whole “I only have 3 weeks left in Ireland” thing. It was wonderful, then, to escape last weekend for some much-needed respite. Our church was taking a retreat in Castledaly, a “town” (there are only a couple of houses and a shop, so I don’t know exactly what to call it) near Athlone right in the middle of Ireland. Since Jon is still in Korea I was a bit nervous to go alone with the boys–but then I heard that there would be babysitters available. That was all the convincing I needed, so we loaded up the car for our last Irish weekend getaway.

We left Cork early Friday morning so we could spend the day in Dublin before meeting up with our friends in Castledaly. Friday happened to be the 4th of July, American Independence Day. Not surprisingly, in Ireland there are no community parades or firework shows on July 4th. And, even though we were the only ones celebrating here, we still dressed in our red, white and blue with pride.

I decided that we needed to do something special to celebrate the 4th of July. Something American.  And there is nothing more American (nay, anything more Seattle) than good ‘ol Starbucks. So, on our way out of town we stopped by the only Starbucks in southern Ireland for some hot chocolates. 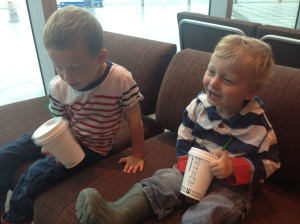 With our tummies happy, we were ready for the road. We arrived in Dublin at about lunch time, so we stopped by Avoca on our way into town. Avoca is a foodie paradise, a bit like a gourmet cookery shop meets country farm shop. The store downstairs sells everything from kitchen gadgets to specialty foods to handmade charcuterie from their on-site butcher. Upstairs there are two cafes that offer all sorts of mouthwatering nummy-ness. We all enjoyed a tasty lunch–that is, after tripping people with my stroller on three separate occasions, having David nearly lock himself in a bathroom, spilling a tray of food and breaking a glass bottle of lemonade, and calming Jacob down from a minor meltdown over a dropped M&M. I’m pretty sure they won’t be inviting us back to Avoca any time soon, so I’m glad I got to enjoy at least one meal there. 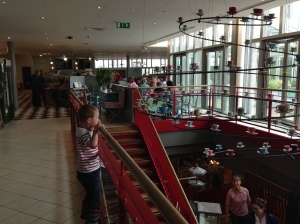 The whole drive up to Dublin I’d been holding out hope that the incessant rain would let up a bit so we could spend the afternoon at the Dublin Zoo. Unfortunately the weather had other plans, so I had to change mine. I have made a pact with myself that, whenever I have the kids with me, I must choose the easier option. Not the thing I want to do, but the easier thing. In this particular case, dragging two already-tried boys through the zoo in a rain storm was not the easy option. Thankfully, I had a Plan B: the Dublin Imaginosity Children’s Museum.

Thankfully, the children’s museum was wonderful and the boys loved every minute of it. We spent several hours playing in the an post (post office), the supermarket, the restaurant, the bakery, the doctor’s office, the construction zone, the T.V. station, and the costume stage. We also played with toy trains and climbed a 3-story tall rocket ship jungle gym. The rain even stopped for a good 15 minutes so we could check out the rooftop garden:

After our fun afternoon at the children’s museum it was time to continue our drive out to Castledaly, about an hour west of Dublin. Our final destination was Castledaly Manor, a gorgeous 18th century manor house. 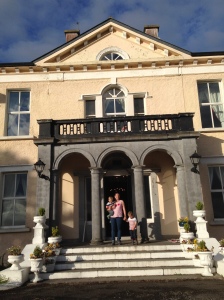 Up until a few years ago, the house was being used as a posh hotel. Now the house is owned by Bible Centered Ministries, an international Christian ministry that focuses on reaching out to children and developing churches. They also host camps and church groups at Castledaly Manor, which is how we came to stay there.

Now, I’ve been to my fair share of church camps and retreats–and most of them involve sleeping on a worn out mattress in your sleeping bag  and eating reheated food from a can. Castledaly Manor could not be further from that church camp stereotype. The “house” (what do you call a mansion with 25 bedrooms?) is set in an idyllic country setting. The absolute peacefulness of the area is what struck me first. The kids, on the other hand, were taken with the slides that were built into the hills…

…and the tire swings hanging from centuries-old trees

…and the swings in the gardens

…and the fields to play frisbee in

…and the secret gardens to discover 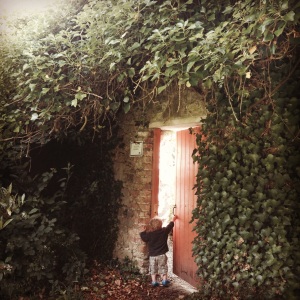 …and the pitches for playing soccer

…and the ponds for throwing rocks. 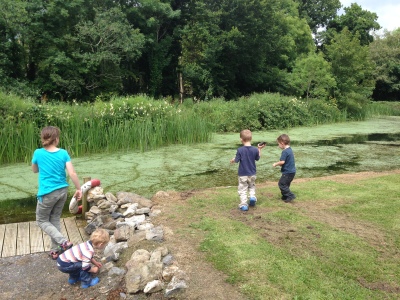 The house itself was incredible. It was built in 1780, which makes it the same age as the United States of America (ironic, since we arrived here on the 4th of July!). The interior was luxurious with marble fireplaces, grand staircases and picturesque window seats. They were even kind enough to include four-poster beds for the children to jump on.

There was a huge industrial kitchen where we prepared our meals (and by we, I mean the few brave souls who are, in my mind, miracle workers). Keeping with the “living like kings” theme of the weekend, we dined like royalty. Every meal was incredible and everything was homemade (including the best salsa I’ve had in Ireland. Hands down.).

Our food was served in the grand dining room (Jacob is the only one in this photo because we were the only ones up at 6 AM eating our breakfast. Sigh…).

There were also beautiful sitting rooms where we could relax and hang out together:

Perhaps my favorite part of the house, however, was this huge window at the landing of the grand staircase. All I could think about every time I saw it was, “how much would it cost to replace this thing if my kids throw a ball through it?”.

Every morning and evening we gathered for prayer, worship and teaching. This weekend our theme was “Jesus is greater” and we went through Matthew 12 where Jesus declares himself to be greater than three things (the temple, Jonah, and King Solomon, if you want the Cliff’s Notes version of the teaching). It was a rich time of teaching, learning and reflecting.

While we grown ups were busy doing our grown-uppy things, the kids went off to “kids camp” in another part of the house.  An amazing group from a church in Dublin came over just to watch our kids and help us out for the weekend. The kids had a wonderful time playing games, reading Bible stories and making crafts with their new friends from Dublin. They even took our kids outside to play in the afternoon so we parents could have a little time to ourselves. It was pretty much the best thing a parent could ever wish for.

At night time we put the kids to bed and then had a little more fun (shhh, don’t tell the kids that we actually have fun after they go to bed or they may never go to bed again). On Saturday we had a table quiz night. Each round had trivia questions or activities we had to complete in a set amount of time–and it all ended with some rousing renditions of popular songs being performed with–ahem–gusto. We were having so much fun that I didn’t even mind being up past midnight (well, at least I didn’t mind until 6:00 the next morning when Jacob decided it was a good time to start our day).

After three days of playing, resting, learning, eating, visiting, exploring and enjoying it was time to say goodbye to Castledaly Manor. I would have been happy staying there for a few more weeks, but it was time to head back to reality.

Since the manor is out in the middle of nearly-nowhere, there was no cell phone or internet connection available outside of one room in the house that had a wifi hot spot. So, I went into the wifi room and set my GPS for “home”, and we started driving. I got about half an hour away from the manor when my GPS decided it was tired of trying to think without direct access to a satellite, and the screen went blank. I had no idea where I was, and all I could see were cows and grass and bushes and the empty little one-lane road I was driving on.

I had paper maps in my car that had never been opened because I rely on technology too much and don’t really know how to properly read a map. So, I opened the map and realized that “middle of nearly-nowhere” was not on it. I knew that I wouldn’t be able to find my way all the way back to the manor through the windy country roads, so I just decided to keep driving. I didn’t know where I was going, but I knew it was somewhere (or, at least, would eventually be somewhere). I finally got to an intersection that had a road sign (Good! There are places somewhere!). One of the towns listed on the sign was not on my map, but the other one was. I decided to drive toward “place on my map”–and it worked!

As soon as I got to the “place” my GPS made contact with her satellite again and we were back in business. I would have loved to stay and explore the town we were in, called Birr, as there was a HUGE castle and a quaint town center. I couldn’t convince the boys to get out of the car, though, so we kept driving (with my SatNav happily refreshed!):

The next town we came to was called Roscrea and, again, there was a huge castle and all sorts of fascinating ruins to explore. The boys still wanted to sit and smash Cheerio’s into their car seats, so I just parked the car outside an old church and snapped a few quick photos. I love the juxtaposition of this scene: a 1,000 year old round tower and church facade with a Tesco grocery store in the background. It’s just so…Ireland.

Shortly after leaving Roscrea we connected with the motorway and we made it back home in time for dinner.We had a great time at our little retreat, and I’m so glad we decided to go. This weekend was just what I needed right now–a last reminder of the people and places that make Ireland so special.