There are so many reasons why I love summer: the sunshine, the days that never end, going for walks outside after dinner…in the daylight…while wearing a t-shirt. And there is no better place to enjoy the long, warm days of summer than at a good old fashioned country fair.

When I found out that one of the largest fairs in Ireland was taking place this weekend in West Cork, I just knew I had to go. I mean, how could we not see a country fair in a country that is known for their country-ness? Jon is travelling in Korea for work this week, so it was just me and the boys. We skipped out of town on Sunday morning and headed out to the Charleville Agricultural Show, located an hour west of our home in Cork.

We got to the fair at 10:00, about an hour after the gates had formally opened for the day. As is commonly the case here in Ireland, we were one of the first ones to arrive for the festivities. Our first stop was at the horse jumping centre where the riders were doing some practice runs. Jacob was obsessed with the horses and kept screeching (much to the annoyance of the horses): “That one! So fast! Horsey running!”

After getting our fill of so-fast-horseys we made our way through the maze of vendor stalls. The brightly-colored toys and balloons caught the boys’ attention. And, since I want to coerce them into enjoying the fair as much as I do, I indulged them each with a new ball. The boys thought they’d won the lottery.

I decided to take advantage of some momentary peace while the boys sat contentedly in the stroller admiring their new balls. We continued browsing the vendor stalls, where they were selling everything from clothing to ancient-looking farm tools to homemade jams to high-tech cow milking stations. True story. I even bought myself a little souvenir from one of the antiques stands, a metal sign that I will hang outside our house. It reads Cead Mile Failte, which translates to “a hundred thousand welcomes”. Reflecting upon our time here in Ireland, I can not think of a more fitting phrase to display in our home.

After shopping time was over, we moved on to the vintage car and tractor show. Here’s David “driving” a restored 1915 tractor: 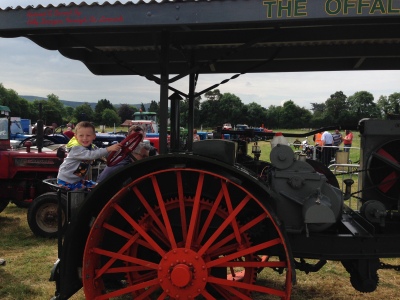 Then it was on to the amusement park rides. Most of the rides were a bit too big for my little guys, so we spent our time on a huge inflatable slide. It was a hit.

One of my favorite sections at the fair was the old time crafts exhibit. They had people there demonstrating how to make felt from wool, weave wicker baskets, and chisel letters into stone. David even got to help a woman spin yarn on an old-fashioned spinning wheel. They started by “brushing” the wool (which came from the sheep shearing demo at the fair earlier in the day) with these huge roller brushes. Then they fed the smooth wool into the spinning wheel and wove two bobbins of string together to make the yarn. Grammy Pete would have been impressed! 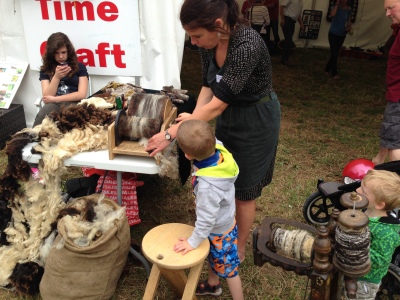 David also tried his hand at metal-working. A very brave craftsman (with very tough looking hands) allowed my three-year old to bang a hammer on a metal rod that he was holding.

The end result was a copper leaf, which was then hung from a string and worn with pride for the rest of the day:

After our busy morning, we needed some nourishment (nevermind that we’d already eaten cotton candy and ice cream before 11:00). We noshed on some burgers and fries…because what else would you eat at the fair? 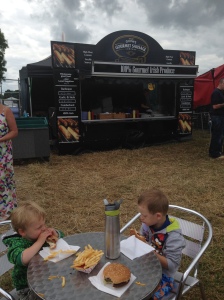 After lunch we wandered around some more and found some cookery demos. At one table they were churning butter by hand–and giving out free samples. It was the most creamy smooth butter I’ve ever tasted. We liked the butter so much that I bought a big tub of it to bring home. After all, who knows when the next time is that I’ll have access to hand-churned butter. 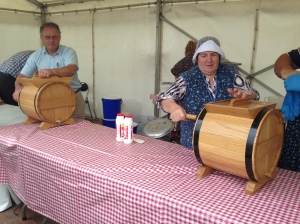 Before calling it a day we made one last stop in the arts and crafts tent to check out the local talent. There was kids’ artwork, handmade Limerick lace, poetry, and lots of home baking. I, of course, wanted to sneak a taste of every cake I walked past, but I managed to restrain myself:

At this point Jacob had fallen asleep in the stroller and David was on the verge of three-year old meltdown, so I read the signs and made my way back to the car (which was parked conveniently close to the exit, due to our “early” arrival that morning). When I asked the boys later that evening what their favorite part of the fair was they both said, “EVERYTHING!”.

And that, my friends, is what we call a success.