Today was our last full day in Dublin–tomorrow morning we will get up early and go collect our weary dog from her overseas travel (poor thing, she didn’t even know what she was getting herself into joining our jet-setting family). There were still several attractions we wanted to see but, alas, time was running out.

First thing this morning we walked down to a restaurant my fellow traveler-friends have been raving about: Queen Of Tarts. 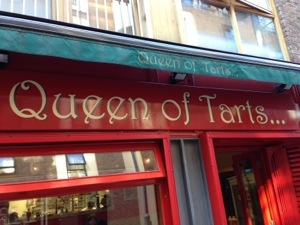 And now I see why. The shop sells every sort of baked scrumptiousness that you could ever hope to find in one space. For a sweets addict like myself, this place could be big trouble if I lived close enough to visit every day (because I’m pretty sure I would go there just about every day). This morning We all had raspberry scones with raspberry preserves and cream. They were simply divine.

After breakfast we walked across the street to Dublinia , a Viking and Medieval museum. Since Jon comes from Viking lineage, he really wanted to learn a bit more about his barbarous ancestors and their role in Irish history.

The museum was really great. There were lots of interactive exhibits and period actors who kept things engaging for even the squirreliest of toddlers (mine). David got dig for Viking artifacts, sit in Medieval gallows, and try on Viking helmets.

When we’d had our fill of Viking paraphernalia, we walked down the block to Dublin Castle. Dublin Castle was built in about 1200 and it was later used as the seat of British rule in Ireland until the 1920’s. It is now a major Irish government complex.

We looked into going on a tour of the castle, but the wait was several hours. In my experience, waiting and little boys don’t typically go well together, so we counted our losses and moved on.

Our next destination was the Kilmainham Gaol (Jail). The gaol was built in 1796 and housed many of Ireland’s most notorious criminals (and loads of other people who did terrible things like steal bread when they were starving…). Several leaders of Irish rebellions were imprisoned–and executed–here. 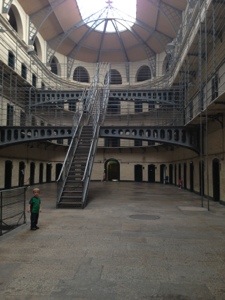 We were able to snag spots on one of the last tours of the day. When we purchased our tickets we were forewarned that if our kids were being disruptive during the tour that we’d be locked in a cell and left overnight.

Just kidding (kinda). Thankfully Jacob fell asleep in the Ergo halfway through the tour and we kept David busy with videos on my iPhone so we could actually make it through one whole tour on this trip. Hey, don’t judge. It worked.

The iPhone came in handy again after our tour when we boarded our bus back home. We barely managed to squeeze on to the overcrowded hop-on, hop-off tour bus–it was so full that we literally put David up on a shelf. He was seated between some boxes of tour pamphlets and a nice Swiss woman (who also managed to find a perch up on David’s shelf. Did I mention those dang “convenient” tour buses were crowded?). Anyway, Nice Swiss Lady let David play with her iPhone the whole 30-minute ride back to our bus stop. She taught David how to use this ridiculous app that makes all sorts of obnoxious sounds. David, of course, loved it.

And just like that, our whirlwind tour of Dublin was over. We had many new experiences, a few incidents that I’d like to forget, and many great moments. I’m glad that we live close enough to return to Dublin some day, because it really is a wonderful city.

Until next time, Dublin! 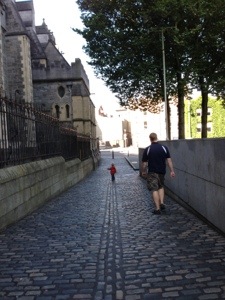