This week brought several storms through Ireland–blustery wind, chilling rain, and even snow in the “mountains” (the quotes are there because Irish mountains are nothing like Washington mountains. They are simply taller rolling green hills than the rest of the rolling green hills that dot the countryside.) Nevermind the storms, though, adventures were still out there waiting for us. I found a nice indoor activity for our family that would get us out of the wind and the rain: cave exploring. After a quick stop at our new STARBUCKS (!) in town, we were on our way. 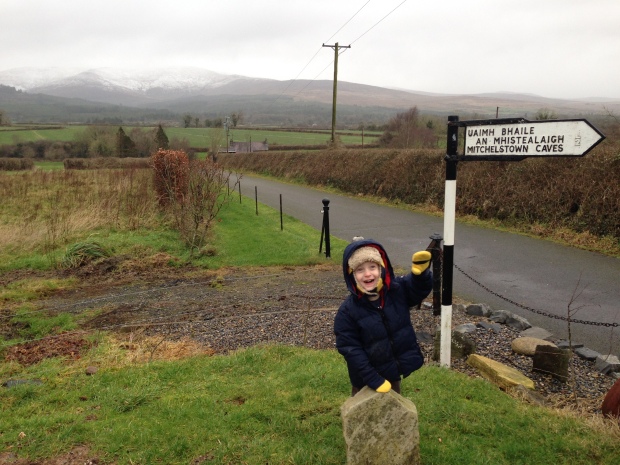 The caves we went to are called the Mitchelstown Caves, and they’re only about 45 minutes outside of Cork. We drove up early Saturday morning and we were the first (only?) visitors of the day. I guess other Irish people don’t have my same sense of let’s-go-cave-exploring-in-a-storm adventure.

The caves were discovered in 1833 by a farmer who was doing some work on his farm when his crowbar fell through a crevasse. His family explored and developed the caves, and to this day the same family still owns the caves and leads tours through them. Here we are at the cave entrance, anticipating the wonders that await us below: 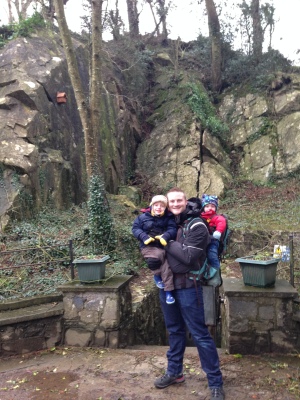 Once you get inside the caves, it is absolutely breath-taking. Stairs lead you down into the caverns where you can see all sorts of stalactites (the mineral deposits that hang from the ceiling like icicles), stalagmites (the little mounds that form on the ground beneath stalactites), pillars (where the stalactites and stalagmites eventually meet to form a floor-to-ceiling column), and “curtains” (intricate patterns of mineral deposits that cover the cave walls, looking like a gently-folded piece of cloth).  Limestone stalactites like these form at the rate of about 1 inch every hundred years, so you can imagine how long some of these bad boys have been growing. I didn’t know that rocks could be so beautiful. 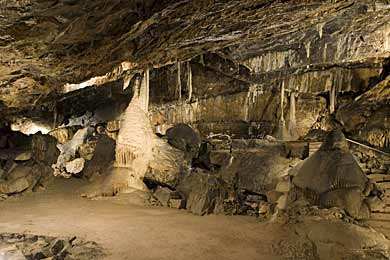 Photo courtesy of Google Images since we weren’t allowed to take photos inside most parts of the cave.

Back in the 1800’s (and well into the 1900’s, in fact) the only way to see the cave was to carry a candle into the dark abyss where you would spend hours climbing over boulders and through tiny crevices. Thankfully for us, that is no longer the case. Today, the cave is fully lit with electric lights and has a cement pathway with handrails that lead you 1/2 a mile into the cave . When you get to the end of the trail in the “developed” section of the cave, there is a large natural platform surrounded by huge pillars. They actually use this platform as a stage, and during the summer the Cork Opera House brings in musicians to play in this unique performance hall. David and I sang “Twinkle, Twinkle, Little Star” from the stage and, I have to say, we never sounded so good. Here we are standing in front of the stage by a large pillar that they call “The Dragon”: 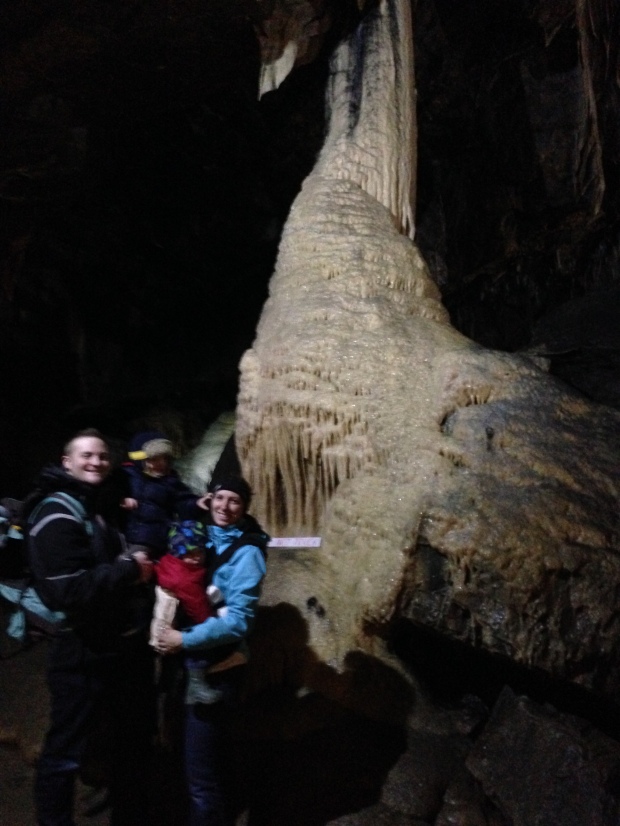 We all loved the caves and will definitely try to return again some day.

After our morning of cave exploration we were ready to head home. At least, we thought that’s what we were going to do. The great Irish road system had other plans for us, though, and after a wrong turn that led to a 16 Kilometer detour the wrong direction on the highway, we ended up in the town of Cahir. Turns out Cahir was a good place to unexpectedly turn up as they have one of the largest and best-preserved castles I’ve seen in Ireland: 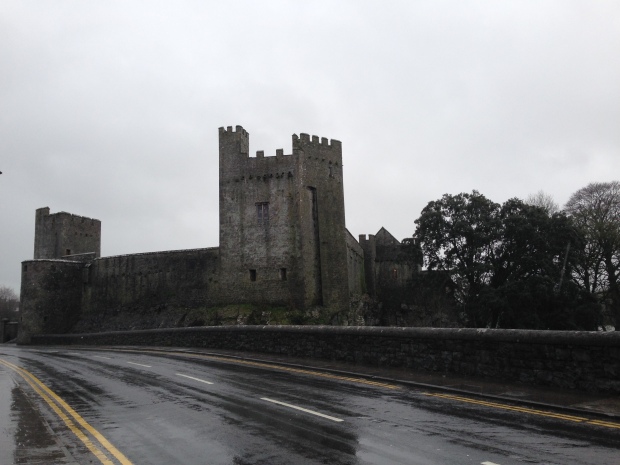 Since we were already there we decided to check out the castle. So, after some quick refueling in the car: 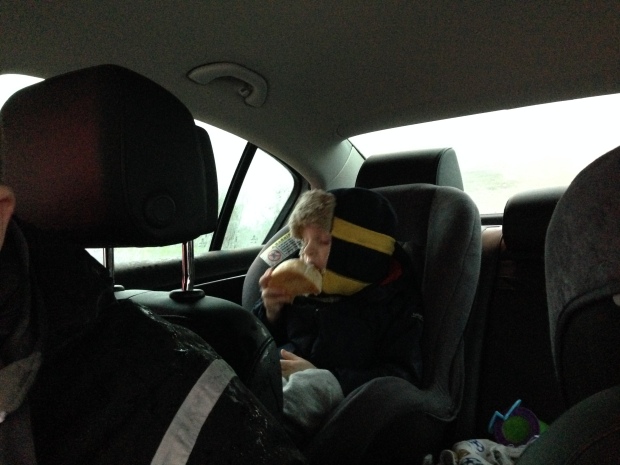 …it was on to Cahir Castle! 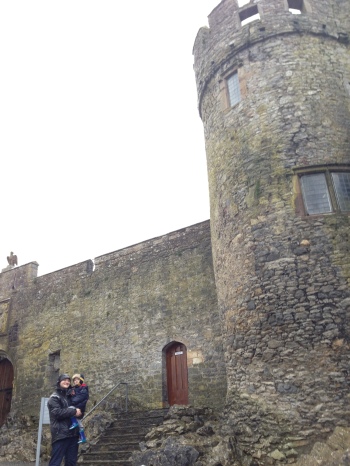 The weather was absolutely horrendous by this point–you can’t tell from the photos, but the rain was blowing sideways and it was freezing cold. We had to make pretty quick work of the castle, then, to avoid becoming human Popsicles. In the end it was all worth it, because the castle was really amazing. There were cannons all over the grounds that David used to help defend the fortress: 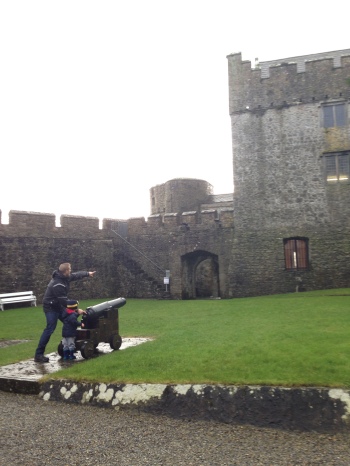 And iron gates that could chop your head off if you got in the way (not really, Grandma Doreen, they’re just for show…): 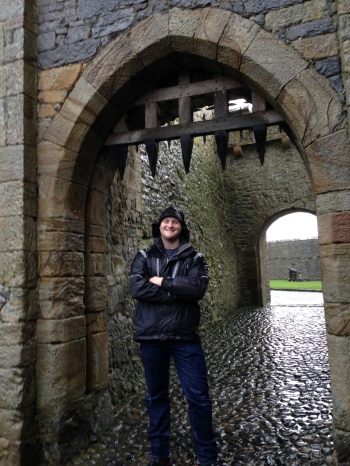 There were several rooms of the castle that we could walk through. Even though the castle was built in 1142, the preservation work that they have done in this castle is beautiful and really gives you a picture of what life would have been like inside these walls. This was the banqueting hall. Note the huge ancient Irish Deer antlers hanging on the wall. These animals weighed between 800-1000 pounds and stood over 6 feet tall, with antlers nearly 12 feet wide. I would have loved to see one of those creatures in real life! 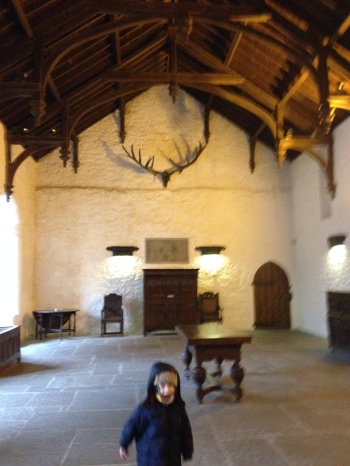 Back outside the castle there were lots of little nooks and crannies and holes in the wall (literally) to explore: 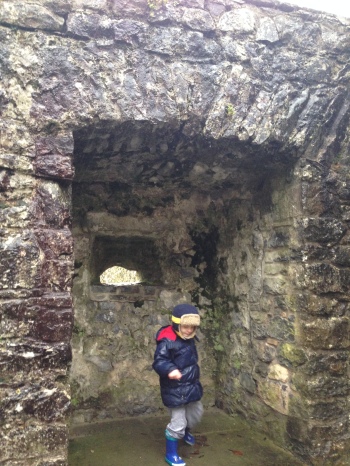 As we came to the outer edge of the castle wall I marveled at how the town of Cahir just exists here. With a castle across the street. I wonder if the people who live and work and shop here realize how cool that is. 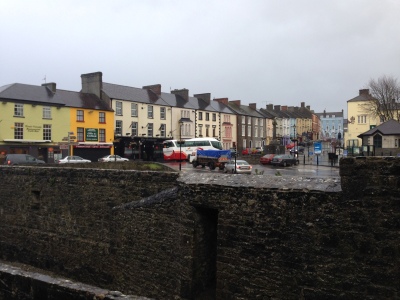 It was a day full of adventure–and misadventure turned into adventure. But isn’t that what adventure is all about? The planned and the unplanned, the known and the unknown. The journey. Even if that journey takes you 16 kilometers out of your way.