Right now I am sitting in my parents’ house in Washington state–the very same house that we spent our last night in before we left for Ireland just over one year ago. It’s strange and surreal and altogether wonderful to be back. Back to the familiar, back to our loved ones, back “home” (whatever that means…I’m still trying to figure it out). The journey back to America had its ups and downs but, if I have learned anything this year, it’s that the best adventures rarely go according to (my) plan.

We left Cork on Friday night, July 25th. This also happened to be Jon’s last day of work in Ireland, so he basically got home and we loaded up the taxi with our 12 bags, double stroller, travel crib, and two car seats for our ride out to the airport. It was a crazy feeling to be leaving one adventure for another, to say our final goodbyes to this wonderful place that we had come to know as home:

The plan for Friday night was to fly on the last flight of the night out of Cork, spend the night in London, then wake up early to catch the first flight of the morning into Seattle. After we got checked in, however, we realized that our flight to London had been delayed an hour. Oh well, we thought, that will give us time to eat some dinner before we board. As we were eating our dinner, an announcement came over the speakers to notify us that our flight was delayed again. And again. And finally, at the time we were supposed to be drifting off to sleep in our hotel in London, our plane arrived:

The hour-long flight to London was uneventful, and we even landed at the brand-spanking-new Terminal 2 at London-Heathrow. It is a beautiful terminal that had only been open for about two weeks:

Unfortunately, if you land at 11 PM at a brand new terminal that has only been open for two weeks, there are no signs or people to direct you on where to go once you land. It’s nothing more than a brightly-lit, stainless steel-encased ghost town. Which wouldn’t be a problem if you knew where you were going. We did not know where we were going.

Well, we knew where we were going, we just had no clue as to how to actually get there. We knew that our hotel was at Terminal 4, which we thought would be easy enough to find since it’s IN THE AIRPORT. Silly us. Turns out, London-Heathrow has a circumference of 25 miles. Nothing is easy to find. Nothing. Especially a hotel that is in a totally different terminal from where you are and it’s now 11:30 and the shuttles have stopped running for the night and the only person you can ask for directions is a cleaning lady who’s texting while she pushes her mop aimlessly down the corridors. So, what do you do in this situation? You ask the cleaning lady for directions. And she tells you to go through the underground tunnel. So you do. For 45 minutes:

Just when you think you’ve entered the tunnel that someone finally dug all the way to China, you pop out at Terminal ? where there is an exit to a street. You spy a “Hotel Hoppa” bus and run frantically for it with your two small children and arms full of luggage. The driver says he’s on his last round for the night so you push your way on and find the only available space in the middle of a crowded aisle. It’s at this point that the bus driver tells you he does not go to your hotel, but he’ll take all of your cash and drop you off there at the end of his round anyway. So you empty your wallet into a fanny pack he has hanging off a bar at the front of the bus and hope he can actually manage find the elusive hotel at Terminal 4.

So you ride the Hotel Hoppa bus to every other hotel in this city-within-a-city-airport and curse your decision to choose a “convenient” hotel. Eventually, just after midnight, you arrive at the hotel. Thankfully the children have already fallen asleep in the stroller so you just wheel them up to the room and dump them into bed. No screaming, thrashing, arguing bedtime tonight, thankyouverymuch.

You hardly sleep because the hotel room is too small to set up a crib, so your squirmy toddler has to share a bed with you. He likes to lay across you and pull your hair in his sleep. Oh well, at least somebody’s sleeping. You’re actually thankful when the alarm goes off at 6:00 because you know you can get up and take a hot shower, and hopefully that will wake you up enough to make it through the next 12 hours of travel.

So, you see, the first part of our journey was the “downs” of the “ups and downs”. But every down must have an up…right? From here on out it was up, up, up–all the way up to the magical world of Business Class travel.

Now, we are normal people. Coach-Class people. People who have only ever wondered and dreamed about what it would be like to be Business-Class people. And, for the first and probably last time in our lives, we found out. Our Business-Class experience began with a visit to the exclusive British Airways lounge where we feasted on freshly-baked pastries and fruit and lattes and whatever else we fancied:

After our tummies were full we got some wiggles out in the play room before it was time to jet out (no pun intended).

This day was also Jacob’s 2nd birthday. We told him he was a very lucky boy to travel around the world on his birthday because he would have the longest birthday ever (32 hours, to be exact). Jacob posed for a quick birthday photo before we boarded our plane:

Jacob loves Things That Go, so his big birthday gift this year was a trip on the Big Plane. He was pretty stoked: 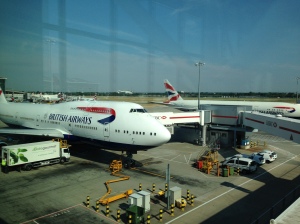 When we found our fancy-pants Business Class seats they greeted us adults with champagne and our tiny travelers with orange juice. They were already speaking my Love Langauge:

After I got the boys situated in their seats I reviewed the 4-page guide that explained all of the wonderful things about flying in Business Class. Wonderful things like a gourmet menu (I chose the Caprese salad, steak, and chocolate mousse) and a fine wine list. Wonderful things like a gift bag full of spa essentials to keep you refreshed and fuzzy socks to keep your toesies warm. Wonderful things like outlets at your seat so your iPhone battery stays fully charged throughout the flight. First among the Wonderful Things, however, is the fact that the seats lie down completely flat to make full-length beds. And there are dividers you can raise so you don’t even see your children. And you can put on a movie for your kids while they’re lying in their comfy beds eating the free jelly beans and candy bars and whatever else they fancy and they’ll fall asleep. For 5 hours. Ahhhhhhh…. 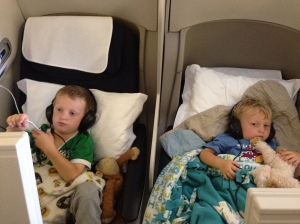 So, yeah, Business Class is amazing. And I’m glad that I got to do it at least once in my life so that now every time I pass those seats on my way back to Coach I’ll know exactly what I’m missing.

Before we knew it, the flight was over and we were touching down in Seattle. After we got through passport control and customs (an hour-long ordeal) we finally made it to baggage claim where we were greeted by our much-missed family. Many hugs and kisses and high-fives were exchanged.

We managed to collect all but one of our bags–the missing one, David’s suitcase, was mistakenly claimed by some unsuspecting passenger. I’m sure she was quite surprised to get home, open up the bag, and find nothing but 3-year old boy clothes and a wet towel that I had shoved in at the last minute when we were rushing out the door. When she realized her swap, she returned the bag to the airport and they promptly drove it down to us. David didn’t really mind, though, because he was too busy playing with squirt guns in his undies to notice some missing clothes:

We all slept well that first night and our jet lag was nearly non-existent (thanks to our super-comfy flight over).  The next day, Sunday, we had a family celebration at my parents’ house for Jacob’s birthday. And, this being our first full day back in America, we ‘merica’d it up with burgers and corn on the cob and watermelon and Goldfish crackers and Funfetti cupcakes and all kinds of wonderful American goodies.

Jacob (and by Jacob, I mean David) had fun opening his birthday presents:

It was an all-around wonderful day with friends and family and food and fun.

The next day, Monday, we drove up to Everett to take care of some business at our house. While we were there we met with the U.S. moving company that will be moving our THIRD shipment of STUFF to California (how do we have so much stuff?!?!). In addition to our business, we also had some time for a bit of fun. And, as you can tell by our faces, it was a LOT of fun:

Yep, that’s right: Costco. Oh, how I’ve missed the gallon-sized jars of peanut butter and the adorable children’s pajamas and the num-num-nummy jalapeno-artichoke dip. Seriously, I missed Costco more than just about any other U.S. location. And now that we have visited Costco, it’s official: we’re back. Back in the land of the big and the plentiful and the unusual. Back in America.

It will take some time to get settled in again (especially since we still have months to go before we can finally settle into a house in California), but I can say one thing for certain: it is so very good to be back.

2 thoughts on “Back To America”