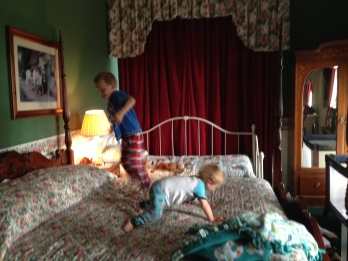 Parenting can be ROUGH.

There are times in parenting where everything is sunshine and lollipops but, to be honest, most days are filled with a lot of hair pulling and silent prayers offered up for my sanity. Case in point:

This month–amongst the lack of schedule and routine that is knowns as “summer”–we’ve been struggling with this little thing called “bedtime”. I don’t know if you’ve heard of it, because apparently my children have NOT. Bedtime is supposed to be this magical time of the night where children go into their rooms and nod off so their parents can get an hour or two ALONE so they can muster up the courage to face another day in the morning.

Someone forgot to tell my kids about the whole “stay in your bed and sleep” part of bedtime, though, and recently we’ve had a few eventful nights as a result.

A few weeks ago on my birthday, for instance, Jon and I were sitting on the couch in our living room watching a movie after “bedtime” when we heard a knock on our door. “Strange,” we thought, “Who would be coming to our house at 9:00 on a Wednesday night?” Turns out it was a Good Samaritan neighbor who had been walking his dog when saw two NAKED boys playing in our pitch-black front yard. The boys claimed that they came from a zoo, but Good Sam could see right through their ruse and thought it best to try and locate some parental figures. Turns out it was our children, who had sneaked out the back door, removed a loose board in our fence, walked through the neighbors yard to the sidewalk, and eventually found their way to our front yard. As for the nakednes of said children, I can’t even fathom.

After getting the fence repaired we had some peace of mind about the boys’ late-night wanderings–even though they still managed to break out of the back door several times before I caught on to the idea of setting booby traps (an ironing board leaned against the inside of the door that makes a disruptive crashing noise when the door is opened has proved quite effective.). Now that the boys are relatively contained to the interior of our house, however, we’re still facing the fact that they will. Not. SLEEP.

Then there was the night that I went in to check on them before I went to bed and they were sleeping peacefully in their closet. On the upper shelves of their closet, that is (Don’t worry, they’d brought their pillows and blankets up there with them. They actually looked quite cozy.).

But the events of two nights ago took the cake. After however many nights of this not-a-bedtime charade I was exhausted and I just wanted to go to bed at a decent hour for once. At about 9:30 I did my final check and the boys were awake, but each was laying quietly in their own beds. I counted this as a victory and decided to hit the sack. After all, how much trouble could they get in? (Famous last words, right?)

Around midnight I was awoken by the shaking of my bed–at first I thought it was an earthquake so I sat bolt upright and, in a daze, took in my surroundings. Turns out it was even worse than an earthquake: the children were still awake (and bouncing on my bed, naked of course.). When I brought them back to their room I surveyed the damage: An entire box of Pull-Ups (that we’d bought at Costco that morning) was strewn about the room (we’re talking, Pull-Ups hanging from the fan and used as mattress stuffing); every article of clothing they own was piled into Mount Wardrobe in the center of the room; the drawer pulls had all been pulled off of their dresser drawers and thrown in miscellaneous places (including, but not limited to: the windowsill, under the dresser, inside socks, and inside the diaper pail); an entire box of TEN THOUSAND MILLION toothpicks were scattered about the floor; and several empty food boxes littered the landscape. It was Armageddon.

So I did what any self-respecting parent would do: After my head stopped spinning circles around my neck and my eyeballs popped back into their sockets, I backed out of the room and shut the door so I wouldn’t say or do anything that might end up in the local newspaper’s Police Beat. Then I promptly got on Amazon to check their selection of child tranquilizers and muzzles. (Just kidding. Sort of. You’d be amazed what deals you can get with Amazon Prime…)

The next morning we spent HOURS cleaning up The Mess…and then we moved on with our lives. Because, really, in the scheme of things bedtime disasters are just a drop in the bucket. By dinnertime both boys were begging me to go to bed–it turns out pulling all-nighters is not for the faint of heart. Or for toddlers.

So here’s the big takeaway: If you are a new parent with a baby who keeps you up all night, just know that it won’t get better for a long, looooooong time…If you are a veteran parent who struggles with your own children–be it bedtime or convincing them to wear clothing in public or whatever their particular “poison” is–know that you are NOT ever alone…and if you don’t have young children at home: help us! Every one of us parents-in-the-trenches needs you!

Power on, parents, power on. And get some sleep, now, will you?