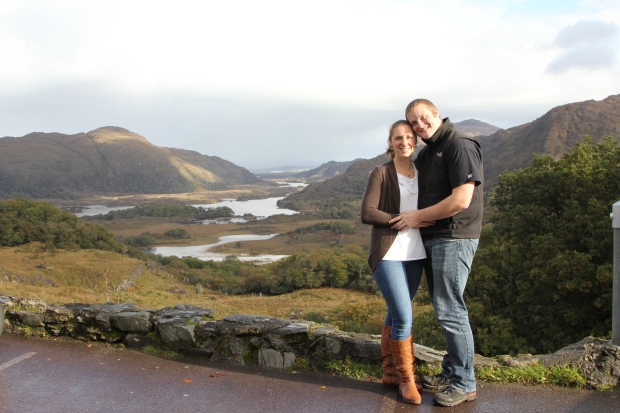 My parents just came for a visit (read all about it here) and, while they were here, Jon and I managed to sneak away for a couple of days to enjoy some time together. Since our time alone is so rare, we wanted to do something that would be best done without our kids. We’ve really been wanting to drive the Ring of Kerry, a scenic tour along Ireland’s coastline. We knew that the boys would go berserk sitting in a car for 8 hours while we marveled at the natural beauty surrounding us so, it was decided, on to the Ring of Kerry we went sans children.

We drove up to Killarney the day before our self-guided tour so that we would be able to get an early start on driving “The Ring” the next morning. Killarney is a cute little town with lots of pubs, restaurants, shops and Victorian-era hotels. We stayed at the Arbutus Hotel right in the middle of town. It was a charming family-run hotel that has been passed down from generation to generation. When we checked in we were greeted with tea and warm homemade gingerbread by the fireplace. It was so warm and cozy and…quiet. 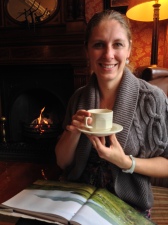 After a nap–because, as any parents of young children know, sleep is the most precious thing you can get on vacation–we went out to explore town. We did a little shopping, went out for dinner, and visited a few pubs to listen to some trad (traditional Irish music). We didn’t stay out too late, though, because tomorrow was going to be our big day of driving The Ring and we’d need to get an early start.

The next morning we had a delicious breakfast at the hotel before heading out to The Ring.  We followed Rick Steve’s Guide to driving the Ring of Kerry so we actually drove in the opposite direction of the tour buses.  Since we were there during the off-season, there was very little traffic and we were able to pull off at every scenic pull-out that we wanted to see (which just so happened to be every scenic pull-out).

Our first stop was a waterfall that was a short hike off the road. It was raining so we didn’t want to bring the big fancy camera on our little escapade into the woods but, trust me, it was beautiful! I think that if we make it out this way again we will bring our hiking boots and just do some hikes–there are miles and miles of trails leading to the most incredible sites! Even the boys would have fun romping through the woods. 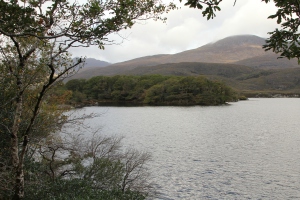 While we were at Ladies View looking at the lakes some mist blew in over the water. If you look closely at the photo below you can see a little rainbow near the bottom of the photo: 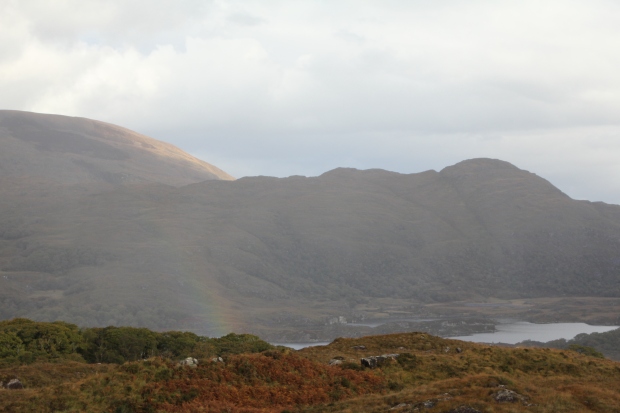 There were lots of beautiful old buildings along the road. This is an old church perched between a river and a small mountain:

And this is a castle on somebody’s private property. There was actually a “For Sale” sign posted nearby, so I’m wondering if we could actually buy some land with our own little castle. Best Irish souvenir ever! 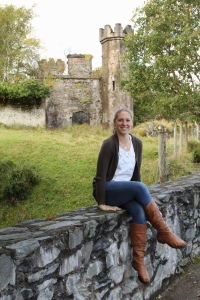 Next stop was the Staigue Ring Fort (so called because of it’s circular shape). Staigue Fort was built somewhere around 300-400 AD but historians don’t know the exact purpose of why it was built or who built it.  The fort was quite impressive with 13-foot thick stone walls and two little chambers that you could walk inside. It’s amazing to me that something that was built 1700 years ago–with no mortar and only the most basic of tools–is still standing right where it’s original builders left it. 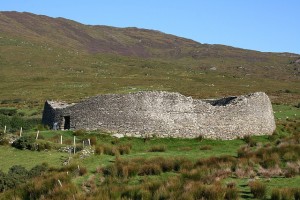 From the Ring Fort we continued on to a vista of the Skellig Islands and the Skellig Experience Visitor Center.  These two islands have quite the history. 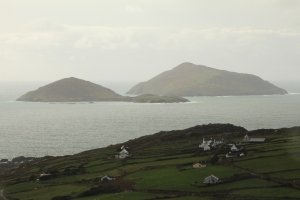 The smaller island, Little Skellig, is home to one of the world’s largest seabird colonies with over 30,000 pairs of Gannets (and, I’m guessing, one of the largest piles of guano in this hemisphere). The larger island, Skellig Michael, is the site of an ancient monastic settlement. Some time in the 6th century monks sailed the 12 miles out to Skellig Michael and labored to create stone huts and thousands of hand-carved stairs into the mountainous terrain. Despite four Viking raids and being in the middle of the Atlantic Ocean for 1400 years, the entire settlement is still in tact. During the summer months, visitors can actually charter boats out to the Skellig Michael and walk around the ancient huts and chapels where the monks lived and worshiped. Again, I am impressed. 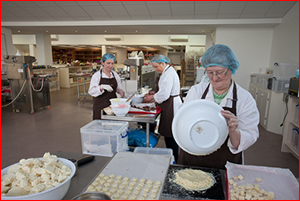 This has to be the most remote chocolate factory in the world, but the quality of their chocolates means that people are still willing to drive hundreds of miles to get a taste. We went into the factory for their free chocolate taste testing, and we ended up spending a small fortune on chocolates to take home to get us through the long Irish winter ahead.

Continuing along the road our next stop was the town of Waterville. Waterville was home to Charlie Chaplin and his wife for a time, so there are several statues and mementos dedicated to the silent film star in town. We pulled over here for some lunch (sub-par food) and a walk along the ocean (phenomenal). 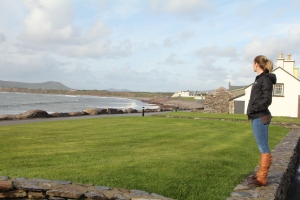 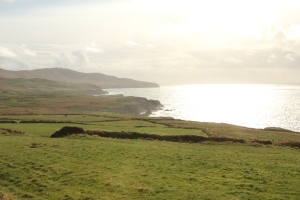 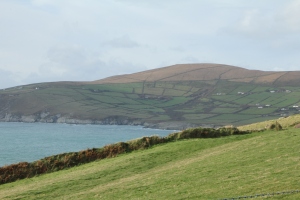 We drove by several “famine villages”–houses and farms that were abandoned in the countryside during the Great Irish Famine of the mid-1800’s. There were hundreds and hundreds of these abandoned houses in Kerry, so it really gave us a picture of the devastation that the Famine must have brought this region. 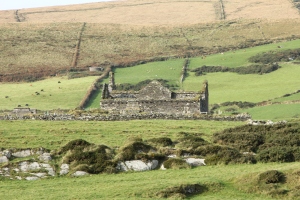 Our final stop on the Ring of Kerry was a place called, appropriately, “The Best View On The Ring of Kerry”.  We walked up a path to the top of a cliff where we were greeted by stunning views of the ocean beyond: 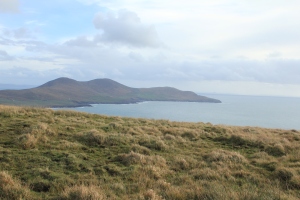 And the cliffs below: 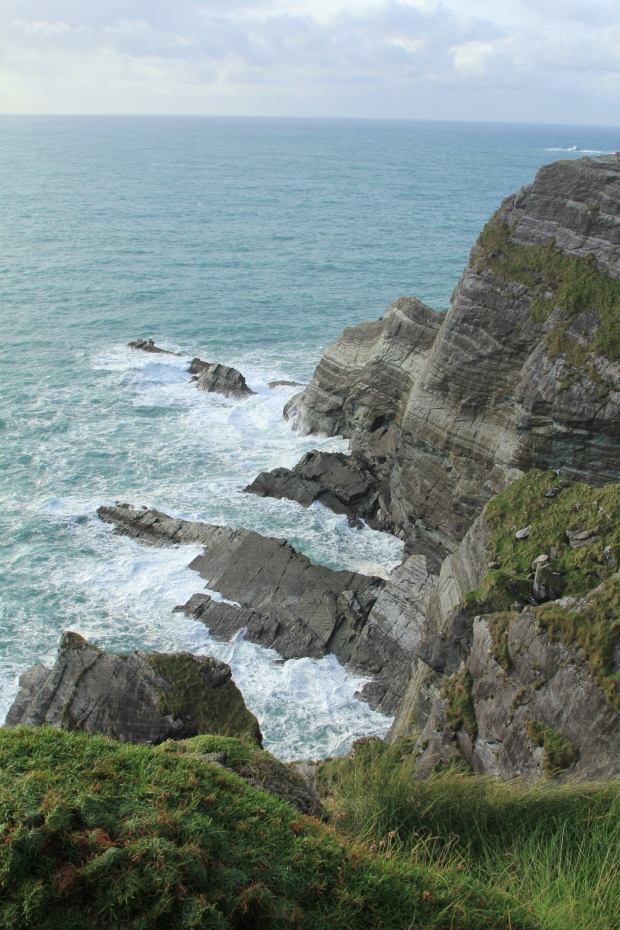 By this time we’d been driving on The Ring for over 7 hours and our daylight was starting to wane. Luckily we had already seen all that we came to see and it was time to head back for home. We had a wonderful time enjoying the natural beauty of Ireland and spending some quality time together.

And now, after a glorious mini-vacation, we are gearing up for our first-ever BIG family vacation! On Monday we leave for two weeks in London and Paris. Bon Voyage!

3 thoughts on “The Ring of Kerry and Killarney”