One of the gifts we received at David’s baby shower was a classic red sock monkey. When David was born I thought it was pretty cute that he and the sock monkey were roughly the same size, so I snapped this photo of him with his little monkey friend when David was 1 week old:

From there, I just couldn’t stop. Every month during his first year of life we took a photo of David with the sock monkey until, after one whole year, the friends looked like this. Oh, the difference a year can make!

And, now, a tradition has been born. Every year on David’s birthday we have him pose with his sock monkey. Here he is at age two:

Then, last week, he turned 3. THREE! I can hardly believe it. My little baby is now a big boy with his own personality and interests and quirks and thoughts and sense of humor. I love him to pieces.

Three is certainly a special birthday–probably the first birthday he’ll actually remember when he’s older–so we had to have a very special birthday party. David is a bit obsessed with the computer game “Angry Birds” right now, so we decided to have an Angry Birds-themed party.

Since I’ve never actually played Angry Birds myself, the internet became my party-planning partner. I found this great website called angrybirds365 that had tons of great party ideas and free downloads. I found this invitation on their website, printed it off on cardstock, and filled in all of the party details for our little guests. Free, simple, and a bit more personal than a Facebook invite 🙂

While I was on the site, I also printed off some Angry Bird faces that we attached to balloons for decoration, some small angry bird pictures that I attached to toothpicks for cupcake toppers, and a slingshot that we used for one of the party games.

This is the first birthday that Aunt Stefanie hasn’t been able to make David’s birthday cake–and I’m no baking brainchild (as in, I’m not patient enough to make those beautiful detailed cakes that I oggle on Pinterest). As a consolation, I told David we could make whatever kind of cupcake he wanted.  David wanted red, blue and yellow cupcakes (because those are the colors of his favorite Angry Birds). Done. We took one box of white cake mix, divided the batter into 3 bowls, added a different color of food coloring to each bowl, and baked the cupcakes. After licking out all 3 bowls of cupcake batter it was time for David’s next job: decorating. I frosted all of the cupcakes, set out bowls of sprinkles, and invited David  to unleash his artistic side. I can’t remember the last time I saw him this concentrated on a single task.

After the cupcakes were decorated we inserted some homemade cake toppers and–TA-DA!–red, yellow and blue Angry Bird cupcakes.

I had a lot of fun planning the menu for the party. The party was at 4:30, so we had snacks and “light dinner” fare.  Our menu included:

After dinner we brought out the cupcakes for a little “Happy Birthday” time. David stared blankly at us while we sang but he still performed expertly in the candle-blowing-out department:

And, before he got too covered in frosting, we managed to snap a family photo (thank you to Rachel for stopping everyone and insisting we do this. Somehow I always forget stuff like this!). We were so blessed to have my parents visiting us all the way from Seattle this week to share in David’s special day!

After we all filled our tummies, it was time for some fun and games. I found a book that had about a dozen make-your-own Angry Bird masks in it, so before the party David and I put them all together for the kids to wear. Everyone looks relatively happy in this photo, but that’s only because you can’t actually see their faces. The kids were TERRIFIED of the masks. As soon as we started putting them on, the babies started crying and kids were hiding behind their moms. Note to self: the preschool crowd is NOT entertained by face-hiding, person-shifting deception devices like masks. Moving on.

One of the kids’ favorite party games is called “Pass the Parcel”. To play, you just wrap a small gift (packets of candy in our case) with wrapping paper, then you wrap that package and another small gift inside another layer of paper, and then that package along with another small gift inside another layer, and so on. At the party, the kids pass the parcel around a circle while music is playing (kind of like musical chairs)–then, when the music stops, whoever has the parcel gets to open it and keep the gift that’s inside. The game continues until all of the layers of the parcel has been unwrapped (and, if your planning is good, every child walks away with a treat). 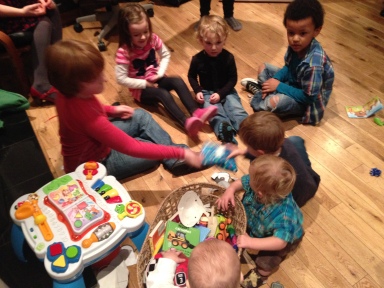 We also played “Pin the Angry Bird on the Slingshot”. I just printed off a picture of the Angry Birds slingshot and several angry bird pictures, cut them out, and put tape balls on the back of the Angry Birds. Each child got a different Angry Bird and had a turn to try to get their bird in the center of the slingshot (the older kids were blindfolded, but we let the babies cheat a bit).

By the time games were over, it was already starting to get late and we moved on to presents. David received so many generous gifts from his friends and family! Toys and games and clothes and movies–incredible. And he really did appreciate them–it was awesome to see David go up to each friend and thank them for their gift after it was opened.

It was a truly memorable birthday. I am so grateful we could celebrate this milestone with so many loved ones, near and far.

David: you are my sunshine and, no matter how big you get, you will always be my baby. Happy 3rd birthday, little David!